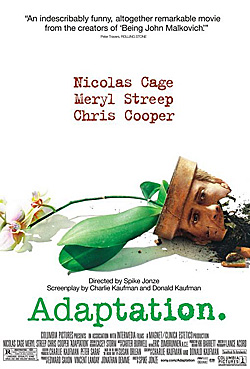 Despite the success of his first produced script, "Being John Malkovich," for which he received an Academy Award nomination for best original screenplay, Charlie Kaufman is plagued by insecurities, both in his career and his personal life. When he is hired to adapt "The Orchid Thief," a nonfiction book about a fanatical orchid breeder, John Laroche, he is completely stumped. Though, on the surface, the book is about Laroche's flower poaching adventures in the Florida Everglades, on another level it's also about the desire in all of us to experience passion. This longing plagues the book's author, Susan Orlean and, Charlie realizes, himself as well. Charlie's twin brother, Donald Kaufman, only makes things worse when he moves in with Charlie and announces he's going to be a screenwriter too. As Charlie battles his severe case of writer's block, Donald cheerily types away on a script about a serial killer with multiple-personality disorder. Donald's script immediately sells, making him the "hot" new writer in town. Then, one day, Charlie has a last ditch inspiration. He'll use his own dilemma as a framework for the script about Laroche and Orlean. But as the words start to flow, and the story takes shape, Charlie inadvertently sets in motion a chain of events impacting on the lives of all the characters.

Watch the trailer and videos of the movie here :