Who is Emma Watson?

Emma Charlotte Duerre Watson was Born to Lawyer parents Jacqueline and Chris in Paris, France on April 15th 1990. Her parents divorced when Emma was 5 years old which is when Emma and her brother Alex (3 years Emma's junior) moved to Oxfordshire and lived with their mother.
At the age of 7 Emma won 1st prize in a school poetry recital: The Daisy Pratt poetry competition. Emma was just 9 years old when casting agents travelled to many different schools in England looking for talented children to audition for the parts of Harry, Ron and Hermione in the upcoming Harry Potter movies. Emma recalls that she auditioned for the part as Hermione because her friends did and she thought it would "be a laugh", her drama teacher at the time recommended Emma to the casting agents who obviously saw the same potential in her and was short listed for the role after several auditions. After being paired with several different "Rons" and several different "Harrys", Emma was called into the producers office alongside Rupert Grint who were both told at the same time that they had won the parts as Hermione and Ron.

At the age of 10, Emma began filming the her first role as Hermione Granger in: Harry Potter and the Philosopher's Stone - the first instalment of the Harry Potter movies taken from the hugely popular books written by J.K Rowling. Even though Ms Rowling had not yet met Emma, she had said that after a chat on the phone with her she knew there and then that she was absolutely perfect for the role as the books main female character Hermione Granger.

On the day of release Harry Potter and the Philosophers Stone had already broken many records, and Emma's performance in the movie won her critical acclaim from movie bigwigs all over the world.

Emma is still working on the Harry Potter movies to this day and now at the tender age of 16, she also has the massively successful: Chamber of Secrets, Prisoner of Azkaban and Goblet of Fire under her belt and "Order of the Phoenix will be in theatres very soon, Emma has also just signed a new contract with Warner brothers to play out her role as Hermione in all 7 of the Harry Potter movies.

Currently studying her A-Levels, Emma more than lives up to her Hermione reputation after passing all 10 of her GCSE exams in the summer of 2006 with 8 A* (the highest grade you can get) and 2 A's. Emma has said on a number of occasions that she would very much like to go to university, but she is interested in so many things that she would find it hard to choose a subject to study.

In her spare time Emma has lots of hobbies including field hockey and dancing, she loves hanging out with her friends and likes to be treated like a normal teenager which is one of the reasons why Emma appeals to so many people around the world. 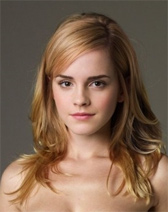