Who is Jennifer Lawrence?

Jennifer Lawrence, in full Jennifer Shrader Lawrence (born August 15, 1990, Indian Hills, northeast of Louisville, Kentucky, U.S.) American actress who by the age of 22 had been nominated twice for the Academy Award for best actress. In 2013, on her second nomination, she won the award for Silver Linings Playbook (2012). Lawrence was known for her versatility on-screen and her accessible, honest off-screen persona.
Lawrence starred in Guillermo Arriaga’s directorial debut The Burning Plain, opposite Charlize Theron and Kim Basinger. Her performance in the film earned her the Marcello Mastroianni Award for best young emerging actor/actress during the Venice Film Festival in 2008.

She was part of the main cast of the TBS comedy The Bill Engvall Show as Lauren Pearson. Written and created by Bill Engvall and Michael Leeson, the show is set in a Denver suburb and follows the life of ‘Bill Pearson’ (played by Engvall), a family counselor whose own family could use a little dose of counseling. The series was canceled in 2009 after having aired three seasons.

Lawrence’s other film credits include a lead role in Lori Petty’s The Poker House opposite Selma Blair and Bokeem Woodbine as well as roles in Devil You Know and Garden Party. Her television credits include roles on Cold Case, Medium, and Monk. She is also featured in the music video for the song “The Mess I Made”, from the album Losing Sleep by Parachute.

Lawrence had the lead role, frequently cited as a “breakout performance” for her, in Debra Granik’s Winter’s Bone (which won best picture at the Sundance Film Festival in 2010). She portrays a seventeen-year-old girl in the rural Ozarks, caring for her mentally-ill mother and her younger brother and sister, when she discovers that her father has put their house and land up as a bond for a court appearance. Lawrence received an Oscar nomination for Best Actress from the Academy of Motion Picture Arts and Sciences, for the role, on January 25, 2011.

Lawrence’s upcoming work includes a role in The Beaver, a dark comedy starring Jodie Foster and Mel Gibson. The Beaver was filmed in 2009, but after spending an extended period of time stalled due to controversy surrounding Gibson, it received a release date of March 23, 2011. Lawrence also has a starring role in the independent film Like Crazy, which premiered at the 2011 Sundance Film Festival and has reportedly been picked up by Paramount Pictures for a wider release. In the summer of 2011, Lawrence will appear as shape-shifting villain Mystique in X-Men: First Class, a prequel to the rest of the X-Men film series. Lawrence’s Mystique is a younger version of the character played by Rebecca Romijn in earlier X-Men films. Lawrence is also set to star alongside Elisabeth Shue in Mark Tonderai’s thriller House at the End of the Street, which completed filming in 2010 and is in post-production.

Lawrence has stated that she has never taken drama classes or acting lessons, simply relying on her instincts when playing a role. She lived in New York City for the first few years of her career, but resides in Santa Monica, California.

Lawrence has been cast as Katniss Everdeen in the movie Hunger Games, set to be released in March 2012. 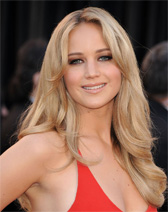