Who is Eddie Murphy?

Eddie Murphy (born Edward Regan, born 3.4.1961) Eddie Murphy is an American actor, comedian and film producer.
Eddie Murphy was born in the Brooklyn area of New York City, to Lillian and Charles Murphy. His mother was a police officer and amateur actor and his mother was a telephone operator. Eddie was raised, along with his brother Charlie, by Lillian and her Vernon Lynch, Murphy's stepfather.

As a child, Murphy was heavily influenced by comedians such as Bill Cosby and Richard Pryor. By the age of 15, Murphy had begun performing his own stand-up routines.

Murphy started out performing stand up at the Comedy Club in the Bay Area of New York - the same venue where Whoopi Goldberg and Robin Williams launched their careers. His early material caused controversy, as he often pushed the boundaries of acceptable behaviour when dealing with certain groups of people, including homosexuals and overweight people.

In 1980, after a great deal of begging, Neil Levy gave Eddie Murphy a break on Saturday Night Live. His debut came on an episode hosted by Malcolm McDowell. He was soon promoted to become a full cast member. He built his early popularity on impressions of Stevie Wonder, Bill Cosby and James Brown, to name a few.

Eddie Murphy's mainstream film debut came in 1982 when he appeared in 48 Hrs, opposite Nick Nolte. The next year, Murphy starred opposite Dan Aykroyd in Trading Places. The film was directed by John Landis, who went on to direct Eddie Murphy in Coming to America and Beverley Hills Cop III. 1984 saw Murphy star in the first Beverley Hills Cop film, to huge box office success and the film series has become a cult classic. He also starred in Best Defense that year, starring alongside Dudley Moore.

Two years later, Eddie Murphy appeared in The Golden Child and a year after that, he reprised his role as Axel Foley in Beverley Hills Cop II. Murphy's lucrative deal with the Paramount Pictures studio was one of the last cases of an actor signing an exclusive deal with a studio.

Murphy's career slumped in the early 1990s, though he saw a brief resurgence with the release of Boomerang and Vampire In Brooklyn. In 1996, however, Murphy starred in The Nutty Professor, starting a run of family-targeted comedies, such as Dr. Doolittle, Mulan and Daddy Day Care. He also starred alongside Steve Martin in Bowfinger, a film that grossed around $66 million at the box office worldwide.

When the Shrek films were made, Eddie Murphy provided the voice of Donkey. In Shrek2, he performed a duet of 'Livin' La Vida Loca' along with Antonio Banderas.

In 2006, Eddie Murphy appeared in a film version of the Broadway production of Dreamgirls. The film version also starred Beyonce Knowles of Destiny's Child and Jamie Foxx. Murphy won the Best Supporting Actor Oscar for his performance in the film.

Eddie Murphy had two singles in the 1980s. 'Party All The Time' was produced by Rick James and 'Put Your Mouth On Me' was a parody of the Donna Summer & Barbra Streisand disco duet 'No More Tears (Enough Is Enough)'. Both songs were taken from his 1982 eponymous comedy album. Following a brief disagreement with Rick James, some of the songs on Murphy's album How Could It Be were produced by Aquil Fudge, Stevie Wonder's cousin.

At the start of the 1990s, Eddie Murphy recorded the album Love's Alright. One of the tracks, 'Whatzupwitu' featured Michael Jackson and another, 'I Was a King' was a duet with Shabba Ranks. By and large, Murphy's music career has been slated by the critics.

Eddie Murphy has been romantically linked with a number of high profile female musicians and actresses, including Lorraine Pearson of Five Star, Whitney Houston and Nicole Mitchell (with whom he had a long-standing relationship). Murphy and Mitchell married in 1988 but divorced in 1993. The singer Mel B of The Spice Girls briefly dated Murphy and fell pregnant. After initially denying paternity of the child, a DNA test proved otherwise.

All videos of Eddie Murphy 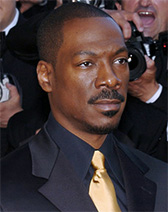