Who is Bill Cosby?

Bill Cosby is an American comedian, actor and television producer best known for The Bill Cosby Show and later, The Cosby Show.
Cosby was born in Philadelphia, Pennsylvania, to Anna Pearl - a maid - and William Henry Cosby Sr. - a sailor in the US Navy. He was only one of four sons born to the couple. He studied at Mary Channing Wister Public School where he captained the Baseball and Track and Field teams. He was also the Class President, despite (or perhaps due to) his want to be the class clown rather than study. During High School, Cosby played for the football, basketball, baseball and running track teams, as well as working various jobs before and after school to help support his family. After failing the tenth grade, Cosby left school to work in a shoe repair shop, later leaving to join the US Navy. He then earned a Track and Field scholarship to study at Temple University, where he studied Physical Education while playing for the football team.

Cosby started is stand-up career in 1962, and worked his way around New York, Chicago, Las Vegas and San Francisco, before Warner Bros. Records released his first comedy album in 1964. In 1965, Bill Cosby became the first African American co-star on a dramatic television series when he landed a role in the NBC show, I Spy. This show earned him three Emmy awards for Outstanding Lead Actor in a Drama Series. In 1969, The Bill Cosby Show aired its first series to massive ratings success. The show was cancelled by NBC before the second season could air, however. In 1984, The Cosby Show aired for the first time and became the highest ranking sitcom of all time. It continued until 1992, with rating barely dropping throughout the entire runtime. Bill Cosby: Film and Music Career Bill Cosby's film career started in 1971 with the movie Man and Boy before reuniting with his co-star from I-Spy, Robert Culp, in Hickey & Boggs. In the mid-1970s, Cosby starred in comedy films like Uptown Saturday Night (1974) and Let's Do it Again (1975). His following films in the 70s - Mother, Jugs and Speed, A Piece of the Action, and California Suite - however, were poorly received. In 1967, Cosby released Silver Throat: Bill Cosby Sings - his sixth album, but the first to showcase his talent for singing. Until this point, he had only released comedy albums under the same record label, Warner Bros. Records. The song Little Old Man from the album, sold over one million copies on it's release.

On the 25th of July, 1964, Cosby married Camille Oliver Hanks, and the two had five children. Of their five children, only one was a boy, but he was tragically murdered on the 16th of January, 1997. Bill Cosby has consistently hosted the annual Playboy Jazz Festival since 1979. This is primarily due to his love of music and because he appeared on Hugh Hefner's talk show in the 1970s. Cosby is also known to be a supporter of Temple University's basketball team and frequently attends their games.

All videos of Bill Cosby 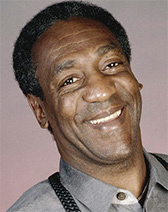