Who is George W. Bush?

After attending primary schools in Texas, George W. Bush enrolled at Phillips Academy in Andover, Massachusetts, from 1961 to 1964. Upon graduation, he studied at Yale University, completing a Bachelor’s degree in history in 1968. After college, Bush enlisted in the Air National Guard, serving in Texas and Alabama until his discharge in November 1974. He completed a Master’s degree in Business Administration from Harvard University in 1975.

In 1977, George W. Bush met and married Laura Lane Welch, a former teacher and librarian, in Midland, Texas; the couple had twin daughters, Jenna and Barbara, in 1981.

Before beginning a career in politics, Bush worked in the Texas oil industry, founding Arbusto Energy in 1977. In 1986, he underwent a recommitment to his Christian faith, which had a profound impact on his life. He moved his family to Washington D.C. in 1988, while serving as a campaign advisor and media liaison with his father’s Presidential campaign. In 1989, he assembled a group of investors that purchased the Texas Rangers baseball team and served as their managing general partner for the next five years.

In 1978, following his family’s distinguished tradition of public service, George W. Bush made his first run for political office to be U.S. Representative of the 19th District in Texas. He lost that race to Kent Hance. In 1994, Bush once again ran for public office and was elected the 46th Governor of Texas. Governor Bush won re-election in 1998 with nearly 69% of the vote, becoming the first Governor in Texas history to be elected to two consecutive four-year terms.

In June 1999, George W. Bush announced his candidacy for the Presidency of the United States. His opponent in the 2000 election was Vice President Albert Gore. Though the Presidential election was held November 7, 2000, the final outcome was not known until December 12, when the Supreme Court decision Bush v. Gore certified Florida’s electoral votes. George W. Bush was inaugurated as the 43rd President of the United States on January 20, 2001.

The Bush Presidency was changed with the events of September 11, 2001. In the deadliest attack ever on American soil, terrorists hijacked four airplanes, crashing two into the twin towers of the World Trade Center in New York City and one into the Pentagon in Arlington, Virginia. The fourth plane crashed in Shanksville, Pennsylvania, after its passengers attempted to overtake the hijackers.

In response to the September 11th terrorist attacks, President Bush declared a War on Terror, which became a wide-ranging assault on terrorists and those entities that support terrorism around the globe. As part of this effort, the War in Afghanistan began in October 2001 and the War in Iraq in March 2003. President Bush initiated a reorganization of the federal government, established the National Counterterrorism Center, the Department of Homeland Security, the Homeland Security Council, and created the position of Director of National Intelligence. The USA Freedom Corps, also created following September 11th, aimed to inspire American citizens to serve humanitarian causes greater than themselves.

In the 2004 election, President George W. Bush faced Senator John Kerry of Massachusetts. President Bush was re-elected for a second term, and inaugurated January 20, 2005. Iraq also held its elections – the first free elections in the country – in January 2005.

During his second administration, President George W. Bush continued the development of humanitarian aid programs including the President’s Emergency Plan for AIDS Relief (PEPFAR) and the President’s Malaria Initiative, to assist those suffering around the world. President Bush also led efforts to provide more than $3.3 billion to the Global Fund to Fight AIDS, Tuberculosis, and Malaria. President and Mrs. Bush worked together to establish the Preserve America Initiative and the National Parks Centennial Initiative, and the President asked Congress to provide more than $6.5 billion to repair and improve the National Park System. President Bush also designated nearly 195,000 square miles of the central Pacific Ocean as national monuments and preserved an additional 1,000,000 square miles of fish habitats.

In January 2007, President Bush announced his plan for a “surge” of United States troops in the Iraq War to combat the insurgency. Following the surge, total violence in Iraq was drastically reduced and the United States established a new embassy in Baghdad in January 2009.

On January 20, 2009, George W. Bush returned to Texas as a private citizen. In January 2010, he united with former President Bill Clinton to lead a major fundraising relief effort for the victims of the devastating Haitian earthquake. President Bush’s memoir, Decision Points, was published in November 2010.

On April 25, 2013, President and Mrs. Bush dedicated the Presidential Center located on the campus of Southern Methodist University in Dallas, Texas. The George W. Bush Presidential Library and Museum is housed inside the Center and it is administered by the National Archives. Five living Presidents and First Ladies attended the Dedication Ceremony.

In addition, President Bush remains actively involved in issues of national and global concern through the George W. Bush Institute, a policy institute that is part of the Center and operated by the George W. Bush Foundation. He continues to emphasize education, global health, human freedom, and support of the military.

All videos of George W. Bush 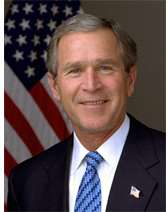