Who is Alfred Joseph Hitchcock?

Alfred Hitchcock is the American and British movie director, producer, and scriptwriter. His name is associated with horror movies, thrillers, and the concept of suspense.

The would-be king of horror was born in August 1899 in Leytonstone, the suburb London. Alfred was the third child in the Catholic family of William Hitchcock and Emma Jane Whelan. The father worked as a greengrocer, the mother was the housekeeper and brought up the children.

The family was religious; the children went to the Jesuit college in which Alfred Hitchcock learned the basic subjects. He excelled in French and Music.

In 1914, Hitchcock became the student of the London County Council School of Engineering and Navigation where he studied navigation and mechanics. Simultaneously, he studied arts at the London University. At 15, he had to quit his studies because of the father’s death. The teenager took up technical drawing and turnery and began to work. The boy was unsociable and withdrawn and did not make any friends. His mother was the only person Alfred trusted. Every night, the boy would tell her about his day before going to bed.

In 1915, Hitchcock volunteered to the army, but his overweight prevented the recruit from taking part in military operations. Alfred remained on standby and learned demolition techniques.

In 1920, the young man became an electrician in the movie studio; in several months, he transferred to the advertising department of the company Famous Players-Lasky where he worked as an artist and subtitles designer.

Drawing cards with the actors’ names for subtitles was the main job of Alfred at the early stage of his career, but later, the talented young man began to create his own scenarios and assist directors.

The work in Famous Players-Lasky changed Hitchcock’s life because, in 1921, his future wife Alma Reville got the job of an editor in the same company.

In 1922, Alfred Hitchcock debuted in the movie industry as a co-director: together with his colleague Hugh Croise, he made two movies, “Always Tell Your Wife” that was later out and “Number 13” that was never completed.

Alfred Hitchcock’s directing biography began in 1925 after the movie “The Pleasure Garden” was created. The first thriller by the director appeared in 1926 – it was “The Lodger: A Story of the London Fog.” The first British talking movie “Blackmail” released in 1929 was also created by Hitchcock.

Later on, Hitchcock created some more movies. “The Man Who Knew Too Much” that appeared on the big screen in 1934, became one of his famous works.

Interrupted by the Second World War, Hitchcock could not devote the tile to directing in Britain because he went to Hollywood. The master settled in Beverly Hills and began to work with the famous producer David Selznick. Their collaboration cannot be called cloudless since Selznick provided the movie financing and advertised it in the press positively but interfered with Hitchcock's work. Still, “Rebecca,” the first Hollywood movie by Alfred Hitchcock, was considered the best movie of the year and won Oscar.

In 1948, the first color movie by Hitchcock was out – it was entitled “Rope.” The audience and critics noticed the director’s fondness of shooting “cold” blondes, such as the legendary actresses Marlene Dietrich, Grace Kelly, Kim Novak, and Vera Miles.

The 1950s became the peak of the master’s career: the director was at the zenith of fame. In 1953, the movie “I Confess” appeared, and in April 1955, he received the citizenship of the USA. At that period, the movies “Rear Window” and “Vertigo” came out – they became the treasures of the world’s movie heritage. Soon, Hitchcock presented the famous thrillers “Psycho,” “The Birds,” and the novella “Man from the South.”

Since the movie “Marine,” the works of the Hollywood thriller and horror master received a cold shower among the audience and critics of the USA. However, in France, Hitchcock was an idol and legend. He was worshiped by the French critics, and people were waiting in long queues to watch his new movies. The directors François Truffaut, Chabrol, and De Palma even imitated his manner.

In 1976, the last movie by Alfred Hitchcock “Family Plot” was out. Three years later, the American Film Institute awarded the director with the Life Achievement Award.

Hitchcock’s parents brought up the children in a severe manner. Once, for a minor trick, Alfred was locked in a ward at the police office. The child did not know he would be set free in 10 minutes and was sure it was forever. As psychologists and biographers believe, this punishment resulted in the great director’s phobia of police officers that lasted for all his life. Hitchcock never drove a car because he was afraid to be arrested by the police.

The subconscious fear of pursuit and unjust punishment is frequently present in the genius director’s movies. The contemporaries used to say that Hitchcock seemed to be a nice person at first, but this impression would fade away if the conversation was long enough.

In his early youth, Alfred’s hobby was to visit London courts where he would spend hours, fascinated, and listen to the proceedings regarding the most terrible crimes. He gladly visited the Criminalistics museum and thoroughly examined the torture devices. As an elderly man, Hitchcock told his friends he had invented a way to strangle a woman with one arm. He also taught his acquaintances a short course on necrophilia.

Besides, as the years passed, the director discovered some other mental abnormalities: he had ovophobia – the fear of egg-shaped objects – and crazy love of cleanliness.

Sir Alfred Joseph Hitchcock had a specific sense of humor. He could give a hundred of red herrings to an actress who could not stand the smell of fish. When the actress Melanie Griffith was 5, Hitchcock gave her a birthday present – the doll in a toy coffin. The doll had Melanie’s mother’s face – he had a quarrel with her at the movie set. He also liked to play jokes on his guests and put on the chairs the cushions that produced indecent noises.

In 1953, the guests who came to Hitchcock’s dinner saw the dishes “Jeanne on the coals,” “freshly cut ladies’ fingers,” and “stuffed bodies in the spicy sauce.”

The genius lunatic could easily give the beautiful actresses to the nervous breakdown. The director often lied that the actress Ingrid Bergman who starred in the movie “Notorious” had fallen in love with him madly.

The director was sending flowers and absurd letters to Vera Miles who appeared in his movie “The Wrong Man” – the woman burned them without reading. By the way, the actress was going to marry. Hitchcock started tailing the actress Tippi Hedren. Because she did not show any return of affection, the woman was threatened that she would be impoverished and her family would drain dry.

Hitchcock’s biographers state that the only person capable of put down the lying foul mouth was Grace Kelly. Having heard the director’s indecencies, she replied she had already heard those words since she also went to a religious school.

Hitchcock said that his movies are the manifestation of terror.


Still, not all works of the master of suspense are terrifying and remind viewers about nightmares. In the director’s filmography, there are about 60 full-length movies, and there are even comedies among them – it is not a typical phenomenon for the star.

The director’s range of interests is wide. Critics and experts frequently argued that the director’s personality is the most interesting element in his artworks.

The movie director presented the world with a large number of various thrillers, and screen adaptations of some novels are still considered to be the best throughout the history. Hitchcock demonstrated talent and the ability to create a psychologically tense situation which turns into the rage in a unique manner, with the political and ironical subtext.

The movie “Rope” is believed to be the climax in Hitchcock’s movie career. The existential thriller, the psychoanalysis of two young male murderers becomes the example that other modern directors followed.

In 1951, the noir movie “Strangers on a Train” was out. Behind its title, there are many genres – it is impossible to give an exact definition. Alfred returned to the black-and-white style – now, with the aim to mark the robust dark setting full of desperation and fear.

The fans of the director were also impressed by the book “Murders I Fell in Love With.” The author presented the collection of horror stories that became quite popular in america.

“Alfred Hitchcock and Three Investigators” was another detective movies and books series that the genius’s fans recognized. Three teenage boys and the director who was recording their investigation became the main characters.

Alfred Hitchcock’s personal life is connected with the only woman – Alma Reville; they had been living together for 55 years. This union was not that of the lovers – it was more like about two movie professionals who loved making thrillers. Alma was an ordinary-looking blonde who worked with Alfred and seized her genius husband’s meanings at once.

Many Hitchcock’s biographers consider him to be a misogynist and draw attention to the movie heritage that proves it persuasively. The director “murdered” many beauties with extreme brutality and sophistication.

In this marriage, the daughter Patricia was born. The father and the daughter were said to have no love and understanding. Just like with any person, Hitchcock did not limit himself in swear words in communication with her. Sometimes, it looked like he was unable to share his feelings in a different way.

It is known that Patricia married and had two children.

Alfred Hitchcock passed away in April 1980 in his house. The cause of the 80-year-old director’s death was the impaired kidney function. According to Hitchcock’s last will, his body was cremated, and his ashes were spread over the Pacific Ocean.

In 1979, the Queen of England conferred the director the title of a nobleman. On the Hollywood Walk of Fame, there is his personal star. 55 movies, many of which are the world’s cinematography classics, constitute his heritage. 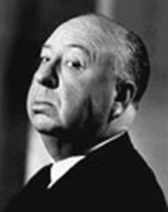