Who is Chris Tucker?

There is nothing tranquil about comedian/actor Chris Tucker. A limber, wiry fellow with a high-pitched voice and a delivery as fast as a mosquito's wing beats, he seems energy incarnate. In regard to his acting, some have hailed him the next Eddie Murphy; indeed, Murphy was one of Tucker's icons while growing up.
A native of Atlanta, GA, Tucker's proclivity for comedy has been lifelong, beginning when he, the youngest of six children, used humor as an attention-getting device and as a way to get his brothers to allow him to hang around them. In addition to Eddie Murphy's comedy, Tucker was heavily influenced by that of Richard Pryor. In high school, Tucker was one of those class clowns who was able to make even his teachers laugh and it was one of his instructors who suggested Tucker display his gifts in a school talent show. He proved a roaring success and following graduation, decided to become a professional. His classmates, having voted him "Most Humorous," supported his efforts. Tucker made his debut at a local comedy club. Because he was underage, Tucker had to sneak in and then do some real fast talking to be allowed to perform. He succeeded and his routine garnered a tremendous response. More local successes followed and this emboldened the then 19-year-old Tucker to try his luck in Los Angeles. Soon after arriving on the West Coast, Tucker had established himself in the major comedy clubs and, after appearing on HBO's Def Comedy Jam found himself a bona fide rising star.

Tucker made his film debut with a small but memorable role in House Party 3 (1994). The following year, Tucker appeared in F. Gary Gray's crazy comedy Friday, playing Smokey, a lazy pot-smoking drug dealer who could be quite rich if only he'd stop using the merchandise himself. Tucker's hilarious improvisation during filming helped to make the film a sleeper hit. In his next film, Dead Presidents, directed by brothers Allen Hughes and Albert Hughes, Tucker hinted at some real talent as a dramatic actor. In regard to movies, 1997 proved a very good year for Tucker who was given his first showcase film in the action comedy Money Talks, which he executively produced. He also had a small but memorable role in Quentin Tarantino's Jackie Brown and played a hyper-manic intergalactic DJ in Luc Besson's The Fifth Element. In 1998, Tucker had his second starring role, working opposite international action superstar Jackie Chan in the action-packed comedy Rush Hour. For reasons known only to him, Tucker abruptly put a stop to his film career appearing only in Rush Hour 2 and 3 in the ten years after the original. 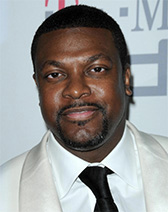