Who is Melania Trump?

In her early days of modeling, Trump worked in Milan and Paris, before moving to New York in 1996. There she gained steady work, working with well-known photographers like Patrick Demarchelier and Helmut Newton and landing covers on magazines such as Harper's Bazaar (Bulgaria), Vanity Fair (Italy), GQ (for which she posed nude in January 2000) and Sports Illustrated Swimsuit Issue.

Melania met her future husband Donald Trump at a New York fashion party in 1998. Although she first refused to date him, the couple eventually began establishing a relationship and were engaged in 2004. The following year they married in a lavish Palm Beach, Florida ceremony with celebrity attendees including Shaquille O'Neal, Barbara Walters, Kelly Ripa, Matt Lauer, Katie Couric, and President Bill Clinton and Hillary Clinton, who was then a Senator from New York state. 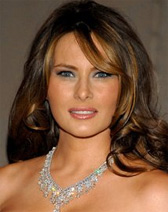