Who is Avril Lavigne?

Renown singer and songwriter Avril Lavigne was born Avril Ramona Lavigne in Napanee, Ontario, Canada, on September 27, 1984, to Judy and John Lavigne, whom both are French-Canadians. She is the mid child in the family, in which she has an older brother, Matthew and a younger sister, Michelle. During her childhood, Avril grew up singing country music and in a church choir and taught herself to play guitar since 12-years-old. She had also started to write her own songs, which was written every time she got home and mainly talks about what happened to her that day. Later she explored more of her skills by joining many talent shows and left her hometown when she was 16 years old.
Avril finally won a competition in a radio contest that allowed her to travel to Ontario and sing with Country legend Shania Twain. Over the next couple of years she tried to make the U.S. recording industry to take notice on her music, but it wasn't until she was in New York at age 16 that she was signed to Arista records. Things began to roll when an Arista employee was so impressed with her music that he returned with his CEO to hear her sang. Once signed to the major label, she immediately dropped out of high school after 11th grade and moved to New York to begin work on her debut album. Unfortunately, it didn't work the way she hoped. Her time in New York was short-lived as she failed to meet her approval, and eventually moved to Los Angeles, California. From there, Avril eventually moved to the west coast to work with producer/songwriter Cliff Magness, and with more secured input, the two of them worked on compositions for her debut record. The fruit of her partnership and hard work with Cliff was apparent in early 2002 when her debut single ''Complicated'' was released in North America.

In succession, Avril's first album "Let Go" was released by Arista on June 4, 2002, and immediately went to number one in Canada and soared high into the Billboard top 40 before eventually was certified "Quadruple Platinum" less than six months later by the Recording Industry Association of America. Along with her debut album success, Avril was named "Best New Artist" at the 2002 MTV Video Music Awards and at the 2003 Juno Awards. In the latter event, she led thenominations with six nods, winning four of them namely for: Single of the Year ("Complicated"); Album of the Year ("Let Go"); New Artist of the Year; and Pop Album of the Year. The debut album spawned more hit singles in various parts of the world, including "Complicated" which went to #1 on the US adult charts and in Australia while reaching #2 on the Billboard Hot 100; "Sk8er Boi" (Skater Boy) that went top 10 in the US and Australia and #1 in Canada; "I'm With You" which reached #1 on the US and world adult charts (based on the US, UK, Canada, Germany, France and Australia), and #4 on the Billboard Hot 100; and "Losing Grip" which reached #1 in Canada, #10 Taiwan, #20 Chile and top 50 on a composite European chart.

Following the debut album's success and her fame, Avril was often compared to Alanis Morissette, Vanessa Carlton and Michelle Branch, who emerged at about the same time and were popularly credited. Apart from the critics, Avril herself tend to describe her first album as a pop album with "a couple of rock songs on it," and indicated a desire to write more rock-oriented songs in the future. Thus, she started working on her next album and wrote most of the lyrics in it with the help of Canadian singer-songwriter Chantal Kreviazuk. She also co-wrote one track, "Nobody's Home", with Ben Moody, formerly of Evanescence, and the rest with her former lead guitarist Evan Taubenfeld. In an attempt to make her second album "Under My Skin" another success, Avril worked together with three producers, notably Butch Walker of Marvelous 3; Raine Maida of Our Lady Peace who is also Kreviazuk's husband; and Don Gilmore, who has produced Good Charlotte and Linkin Park. And so "Under My Skin" was done and released on May 25, 2004. Approvingly, this album was a success, going to #1 around the world, notably in the UK, USA, Canada and Australia and on the Billboard Internet charts.

The first single of "Under My Skin" titled "Don't Tell Me," went to #1 in Argentina, top 5 in the UK and Canada, and top 10 in Australia, Brazil and a European composite chart in June, 2004. In succession to that, the album's second single "My Happy Ending" also reached #9 on the Billboard Hot 100. As a result of this album success, Avril favorably won a World Music Award in 2004 for favorite pop/rock artist, and also, once again lead all the Juno nominees at the 2005 event with five nominations, picking up three, adding them to her previous four, making that seven in total. In addition to those awards mentioned, Avril also had the many others, including 3 MTV Asia Awards for favorite female artist, favorite breakthrough artist & style (2003); 4 Juno Awards for Single of the Year ("Complicated"), Album of the Year ("Let Go"), New Artist of the Year and Pop Album of the Year; Favorite Female Singer at the 18th Annual Kid's Choice Awards (April 2005); and 3 Juno Awards, mainly for Fan Choice Award, Artist of the Year, and Pop Album of the Year ("Under My Skin") in the year of 2005. Some other awards she got for her personal appearances among others were; making it to the list of FHM 100 Sexiest Women in the World in 2003 and the FHM 100 Sexiest Women in the World 2004.

Beyond her solo music career, Avril has a band consisting of Devin Bronson on lead guitar, Craig Wood on rhythm guitar, Charlie Moniz on bass, and Matt Brann on drums. As for her personal life, Avril once dated the then band member Jessie Colburn, before then dating Deryck Whibley from the pop punk band Sum 41. Being together for two years and got engaged in Venice, Italy, in June 2005, the couple then tied the knot July 15th, 2006 in California with about 110 guests in attendance. The memorable year, in the meantime, also found her straying into film industry to provide voice for animated flick "Over the Hedge" as well as to highlight Richard Linklater's "Fast Food Nation."

On April 17, 2007 she released third album titled "The Best Damn Thing." The first single, "Girlfriend" immediately entered Billboard 100 chart at #5 in its first week release. In this album, Avril employed a different vibe. Taking off the baggy pants, she wore a skirt and danced in the video of "Girlfriend." The change can also be seen in the concept of the songs featured in the album. "Of course, I still have my boy-bashing songs, but they're very playful. So the record is really fun and cool and different and honestly, I think it's my best record yet. I can say that with confidence," she said.

Sadly, controversy soon entailed the success. Despite marked a double-platinum single in 2007, "Girlfriend" suffered criticism for a far departure from Avril's well-liked "dark" sound. Its multi-lingual versions in Spanish, French, Italian, Portuguese, German, Japanese and Mandarin were also criticized for poor accents, but the worst came in July 2007 after two songwriters sued her for plagiarism. "Girlfriend" was claimed copying the work of a 1979 song titled "I Wanna be Your Boyfriend" that was popularized by a band named The Rubinoos. Avril's team however, felt confident on "Girlfriend" originality and ruled the suing a "legal blackmail". Chantal Kreviazuk who worked in Avril's second album also added the tension after she gave an interview doubting Avril's capability of writing scores. Kreviazuk accused Avril of using a song titled "Contagious" that she sent to her without including her name in the writing credit. Few days later, Avril responded to the two accusations by spreading the fact and defending her talent in writing on her official website.

The heavy cloud started lifting up with the release of her next singles and the success of 'Girlfriend' in several award events. Throughout 2007, the song and its music video were multiple winner of awards such as MuchMusic, Kids Choice Awards and Los Premios MTV. During this time, she also went back into the big screen, taking part in thriller drama "The Flock" which Richard Gere toplined. 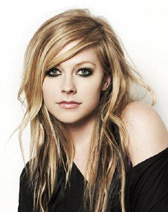