Who is George Bush?

George Bush, was born on June 12, 1924, in Milton, Massachusetts, into a wealthy family as George Herbert Walker Bush.
After graduating from Phillips Academy, Andover, MA in 1942 he served as the youngest U.S. naval carrier pilot in the Pacific till 1945, winning the 'Distinguished Flying Cross', and three Air Medals. On January 6, 1945 George married Barbara Pierce, of Rye, New York. Bush studied economics at Yale University. After graduating he moved to Texas where he started working in the oil-drilling business. He co-founded the Bush-Overbey Company, Zapata Petroleum Corporation and Zapata Off-Shore, of which he also became president in 1954.

In 1966 he sold his interests to concentrate on politics. He became active in the Republican Party. After running unsuccesfully as a Republican candidate for the Senate in 1964, he entered the House of Representatives in 1967. This was the beginning of an extensive political career.

Bush served as ambassador to the United Nations from 1971-1972, was chairman of the Republican National Committee from 1972-1973, chief of the U.S. liaison office in Peking from 1974-1976, and director of the C.I.A. from 1976-1977. In 1980 Bush campaigned for the Republican nomination for the U.S. presidency but withdrew later to support Reagan, who chose Bush as his running mate. Bush became vice-president during Reagan's two terms in the White House, from 1981-1989. In 1988 Bush ran for the presidency again and this time succesfully.

This made him the first president since Martin van Buren in 1836 to be elected directly to the presidency. Bush beat his Democratic opponent Michael Dukakis from Massachusetts with 54 percent of the popular vote (to Dukakis'49%) and 426 of the electoral votes (to Dukakis' 111). During his presidency the Democrats did however retain secure majorities in both houses of Congress.

Bush promised in his campaign a partial continuation of Reagan's politics. He followed Reagan on social issues, such as a strong stand against abortion, but thereby did call for a softer approach by calling for a "kinder, gentler nation". In his State of the Union in 1990 he stressed his commitment to being the "educational president". As for the domestic issues, Bush was not very succesful.

During his campaign Bush stated not to bring on new taxes: "Read my lips...NO new taxes". But due to a continuing rising federal budget deficit he had to agree in 1990 to a significant tax increase. His 'war on drugs' had very little impact as a result of the absence of significant funding.

Bush's interest lay particularly in the area of foreign politics. The time of his presidency was one of great changes within the world. The collapse of communism in 1989 in Eastern Europe left the United States as virtually the only "superpower" in the world. Bush negotiated a continuation of arms reduction with the Soviet Union (including unprecedented cuts in Nuclear arms). In 1989 Bush ordered the U.S. invasion of Panama to depose the dictator Manuel Noriega, who was thereafter brought to the United States where he was accused of drugs trafficing.

In 1990 Saddam Hussein invaded Kuwait. Bush answered to this invasion by ordering troops to Saudi Arabia and forming an international alliance with the backing of the United Nations; "Operation Desert Storm". The liberation of Kuwait went reasonably swift without the loss of many lives on the side of the allied forces. This certainly contributed to Bush's popularity. After the Gulf War about 90% of the people, asked in polls, claimed to approve of the way Bush was handling his office.

It did not take long before the economic situation in the United States made Bush's popularity decline rapidly. The recession, already begun in 1990, continued in 1991 and the American public began to blame Bush for neglecting domestic issues. This most likely gave cause to Bush's defeat in the 1992 presidential elections. The Democrat Bill Clinton was elected the 42nd President of the U.S.A.

All videos of George Bush 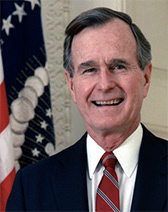