Who is Donald Trump?

Donald John Trump was born in 1946 in Queens, New York City, the fourth of five children of Frederick C. and Mary MacLeod Trump. Frederick Trump was a builder and real estate developer who specialized in constructing and operating middle income apartments in the Queens, Staten Island, and Brooklyn sections of New York.

Donald Trump was an energetic and bright child, and his parents sent him to the New York Military Academy at age thirteen, hoping the discipline of the school would channel his energy in a positive manner. Trump did well at the academy, both socially and academically, rising to be a star athlete and student leader by the time he graduated in 1964.

During the summers, Trump worked for his father's company at the construction sites. He entered Fordham University and then transferred to the Wharton School of Finance at the University of Pennsylvania, from which he graduated in 1968 with a degree in economics.

Trump seems to have been strongly influenced by his father in his decision to make a career in real estate development, but the younger man's personal goals were much grander than those of his father. After graduating college, Trump joined the family business, the Trump Organization. In 1971 Trump moved his residence to Manhattan, where he became familiar with many influential people. Convinced of the economic opportunity in the city, Trump became involved in large building projects in Manhattan that would offer opportunities for earning high profits, utilizing attractive architectural design, and winning public recognition.

When the Pennsylvania Central Railroad entered bankruptcy, Trump was able to obtain an option (a contract that gives a person the authority to sell something for a specific price during a limited time frame) on the railroad's yards on the west side of Manhattan. When plans for apartments were refused because of a poor economic climate, Trump promoted the property as the location of a city convention center, and the city government selected it over two other sites in 1978. Trump's offer to drop a fee if the center were named after his family, however, was turned down, along with his bid to build the complex.

In 1974 Trump obtained an option on one of the Penn Central's hotels, the Commodore, which was unprofitable but in an excellent location near Grand Central Station. The next year he signed a partnership agreement with the Hyatt Hotel Corporation, which did not have a large downtown hotel. Trump then worked out a complicated deal with the city to revamp the hotel. Renamed the Grand Hyatt, the hotel was popular and an economic success, making Trump the city's best known and most controversial developer.

In 1977 Trump married Ivana Zelnickova Winklmayr, a New York fashion model who had been an alternate on the 1968 Czech Olympic Ski Team. After the birth of the first of the couple's three children in 1978, Donald John Trump, Jr., Ivana Trump was named vice president in charge of design in the Trump Organization and played a major role in supervising the renovation of the Commodore.

In 1979 Trump rented a site on Fifth Avenue next to the famous Tiffany & Company as the location for a monumental $200 million apartment-retail complex designed by Der Scutt. It was named Trump Tower when it opened in 1982. The fifty-eight-story building featured a six-story courtyard lined with pink marble and included an eighty-foot waterfall. The luxurious building attracted well-known retail stores and celebrity renters and brought Trump national attention.

Meanwhile Trump was investigating the profitable casino gambling business, which was approved in New Jersey in 1977. In 1980 he was able to acquire a piece of property in Atlantic City, New Jersey. He brought in his younger brother Robert to head up the complex project of acquiring the land, winning a gambling license, and obtaining permits and financing. Holiday Inns Corporation, the parent company of Harrah's casino hotels, offered a partnership, and the $250 million complex opened in 1982 as Harrah's at Trump Plaza. Trump bought out Holiday Inns in 1986 and renamed the facility Trump Plaza Hotel and Casino. Trump also purchased a Hilton Hotels casino-hotel in Atlantic City when the corporation failed to obtain a gambling license and renamed the $320 million complex Trump's Castle. Later, while it was under construction, he was able to acquire the largest hotel-casino in the world, the Taj Mahal at Atlantic City, which opened in 1990.

Back in New York City, Trump had purchased an apartment building and the Barbizon-Plaza Hotel in New York City, which faced Central Park, with plans to build a large condominium tower on the site. The tenants of the apartment building, however, who were protected by the city's rent control and rent stabilization programs, fought Trump's plans and won. Trump then renovated the Barbizon, renaming it Trump Parc. In 1985 Trump purchased seventy-six acres on the west side of Manhattan for $88 million to build a complex to be called Television City, which was to consist of a dozen skyscrapers, a mall, and a riverfront park. The huge development was to stress television production and feature the world's tallest building, but community opposition and a long city approval process delayed construction of the project. In 1988 he acquired the Plaza Hotel for $407 million and spent $50 million renovating it under his wife Ivana's direction.

It was in 1990, however, that the real estate market declined, reducing the value of and income from Trump's empire; his own net worth plummeted from an estimated $1.7 billion to $500 million. The Trump Organization required massive loans to keep it from collapsing, a situation that raised questions as to whether the corporation could survive bankruptcy. Some observers saw Trump's decline as symbolic of many of the business, economic, and social excesses from the 1980s.

Yet Trump climbed back and was reported to be worth close to $2 billion in 1997. Donald Trump's image was tarnished by the publicity surrounding his controversial separation and the later divorce from his wife, Ivana. But Trump married again, this time to Marla Maples, a fledgling actress. The couple had a daughter two months before their marriage in 1993. He filed for a highly publicized divorce from Maples in 1997, which became final in June 1999.

On October 7, 1999, Trump announced the formation of an exploratory committee to inform his decision of whether or not he should seek the Reform Party's nomination for the presidential race of 2000, but backed out because of problems within the party.

A state appeals court ruled on August 3, 2000, that Trump had the right to finish an 856-foot-tall condominium on New York City's east side. The Coalition for Responsible Development had sued the city, charging it with violation of zoning laws by letting the building reach heights that towered over everything in the neighborhood. The city has since moved to revise its rules to prevent more of such projects. The failure of Trump's opponents to obtain an injunction (a court order to stop) allowed him to continue construction.

All videos of Donald Trump 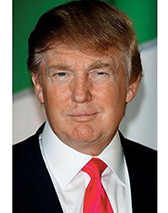