Who is Tom Cruise?

American actor
Born on July 3, 1962 in Syracuse, New York, he is the third child as well as the only son of Thomas Cruise Maphoter and Mary Lee Pfeiffer. Together with his three sisters, Lee Anne, Marian, and Cass Mapother, Tom spent his early life residing in various locations, partly due to his father's occupation as an electrical engineer. The family had wandered through Ottawa; Louisville, Kentucky; and Wayne, New Jersey before they finally settled in Glen Ridge, New Jersey. By this time, his parents had already divorced and Mary Lee remarried a man named Joseph South.

Having attended a dozen of different schools, Tom often encountered difficulties in reading text, thus came to a realization that he had a learning disorder called dyslexia. He then focused his attention on sports during his study at Glen Ridge High School. It was in this period that he got the injury which forced him to leave the school's wrestling team. Furthermore, it prevented him to pursue any career in sports. Knowing this, he started to look for another field which he could fit in. It appeared that acting was a decent choice, so he decided to take a further look by joining the school's stage production. Acting apparently turned out to satisfy his need to compete and gain attention while also helped him to cope with his dyslexia as its memorization aspect improved his concentration and motivational skills. Having enjoyed his performance in the student's musical project of "Guys and Dolls," he decided to establish a professional acting career.

Being determined to accomplish his dream, Tom went to New York after his high school graduation in 1980. This was the time when he shortened his given name, Thomas Cruise Mapother IV, to a more stylish name of Tom Cruise. In order to support his life, he worked intensely as a bus boy, a porter and a table-cleaner. He afterwards used some of the money to learn drama at the prestigious Neighborhood Playhouse, being taught by both Sanford Meisner and Phil Gushee, the remarkable acting instructors. Gradually developed his skills, he started to join various auditions, eventually made his way to secure a role in a musical play called "Godspell." His performance impressed an Italian film director, Franco Zeffirelli, who later offered him a small role in "Endless Love" (1981). Having been signed by Paula Wagner of Creative Artists Agency, he went further playing supporting characters in "Taps" (1981) and "The Outsiders" (1983).

Tom earned his first major role through a comedy film entitled "Losin' It" (1983). However, it was "Risky Business" (1983) that caused his name began to make sound mainly for his excellent acting and attractive look either which had raised people's interest. He continued to perform brilliantly in "All the Right Moves" which also came out in the same year. The press started to label him as one of the "Brat Pack," a group of young actors in their twenties who were predicted to rule the movie industry in early 1980s. This was indeed correct and proper to be addressed toward him as he earned his first nomination at Golden Globe Awards for Best Performance by an Actor in a Motion Picture Comedy/Musical in 1984. In 1986, Tom created sensation through his role as Lt. Pete 'Maverick' Mitchell in Tony Scott's "Top Gun." Becoming a box-office, this particular film brought him to achieve success and gain worldwide popularity.

After starring in "The Firm" (1993), he took role as a vampire named Lestat in "Interview with the Vampire" (1994) which was the adaptation of Anne Rice's best-seller novel. His decision to join the film cast raised some protests from both the author and the book fans due to his physical appearance that was totally different from Rice's description of Lestat. This problem was solved as Rice finally accepted the casting after witnessing Tom's performance. The year of 1996 marked his first venture on film production through "Mission: Impossible" (1996) which he also played in. Shortly thereafter, he appeared in "Jerry Maguire" (1996) alongside Renee Zellweger and Cuba Gooding Jr.. All these films turned out to be the top grossing films which scored more than 105 million dollars in domestic release. Tom therefore became the first actor in history to be in the movies with such achievement for five times in a row.

In 1997, Tom was granted another Golden Globe Award of Best Performance by an Actor in a Motion Picture - Comedy/Musical for his role in "Jerry Maguire." He also was included as one of the nominees for Best Actor in a Leading Role at Academy Awards. He once more repeated the same attainment less than four years through "Magnolia" (1999); only this time was in the category of Supporting Role. The 21st century had been a glorious period for Tom since he had gained double success as an actor and a producer in "Mission: Impossible II" (2000), "Vanilla Sky" (2001), and "The Last Samurai" (2003). The latter then led him to be nominated for Best Performance by an Actor in a Motion Picture - Drama at the 2004 Golden Globe Awards. Having played as a chief police officer in Steven Spielberg's sci-fi film entitled "Minority Report" (2002), he created surprise when decided to take a contrasting role as a hit man named Vincent in "Collateral" (2004). "I've never played a character like this before," he explained. "Vincent interested me because he is such an anti-social personality, bringing destruction and chaos with him wherever he goes. He's a force of nature."

Tom once more teamed up with Spielberg in the 2005 summer blockbuster movie, "War of the Worlds." By July, this action sci-fi has collected more than 190 million dollars, proving that he was still a Hollywood superstar who did not lose his charm and acting quality. Looking upon his portrayal of the many characters he's been playing, Tom apparently has developed what so called as the "Generic Tom Cruise Character." Some movie fans and critics have noticed that in the beginning this role type is a self-centered and haughty man who only cares about himself, but in the end turns out to be a better person after experiencing a radical change. This characteristic can be seen in most of his popular movies, such as "Rain Man," "Jerry Maguire," "The Last Samurai," and "War of the Worlds." After "War of the Worlds," Tom's next project was "Mission: Impossible 3" (2006), being in the same scene with Laurence Fishburne, Ving Rhames, and Keri Russell. Once more took role as the producer of this second sequel of "Mission: Impossible," he applied the same status in the movies of "Elizabethtown" (2005) as well as "Ask the Dust" (2006).

Apart from his professional career as an actor and producer, Tom's private life creates the same sensation as that of his activities in the acting field. Formerly dated the well-known actress of TV series "Little House on the Prairie" (1974-1983), Melissa Gilbert, he had lived together with a striking actress named Rebecca De Mornay from 1983 to 1985. On May 9, 1987, he finally married Mimi Rogers, whom he first met at Paul Newman's Road Racing Classic Show in Georgia. Spending three years of togetherness, this couple decided to end their marriage in February 1990. It wasn't too long before he found a new love in Nicole Kidman, his opposite in "Days of Thunder." By the end of 1990, they had proclaimed themselves as husband and wife. This lovely couple then starred together in "Far and Away" and "Eyes Wide Shut" (1999). In January 1993, Tom and Nicole adopted a baby girl whom they named Isabella Jane Kidman Cruise. It was followed by the adoption of Connor Anthony Kidman Cruise two years later.

Happily married for ten years, Tom suddenly made a shocking decision to divorce Nicole legally on August 8, 2001. He afterwards dated Penelope Cruz, his opposite in "Vanilla Sky," but the relationship sadly only lasted for 3 years. By April 2005, he was spotted being together with Katie Holmes who is sixteen years his junior as she barely turned 26 at that time. Press thereby suspected that this only served as a tool to enhance their publicity, but the couple strongly opposed the speculation, especially Tom. As if to prove that they really put serious thought on their romance, the couple shockingly proclaimed their engagement on June 17 that year followed by a confirmation that Katie was pregnant. The couple then joyously welcomed the birth of their child, a daughter named Suri Cruise on April 18, 2006. However, since there was not much publication on the baby people thus began to suspect that she actually did not exist. All of the speculation finally was shot down with the release of Suri's pictures shot by renowned photographer Annie Leibowitz by September 5, 2006. Shown by Katie Couric during her first night as the anchor of CBS "Evening News With Katie Couric", the photos surely were more than enough in feeding up people's curiosity that had roamed around for months, automatically shutting down the ill rumors surrounded the baby existence.

Being one of Hollywood's most popular actors, Tom has already been the subject of attention. Therefore, it was not surprising if he often encountered problems, mostly about the rumors of his homosexuality. During his marriage life with Nicole, he had sued two tabloids, The Star and London's Express, for publishing false reports concerning their marriage. Tom, along with Nicole, won both cases, but apparently these were only the beginning of a series of other disputes. In 2001, he filed a lawsuit against Bold Magazine publisher, Michael Davis who has claimed that he obtained a videotape of Tom in a homosexual relationship. However, he later dropped the case as the magazine retracted Davis' statement while Davis promised that he would never make such allegations in the future. Shortly thereafter, a porn star named Chad Slater or known as Kyle Bradford uttered that he had an affair with this renowned movie star during his interview with Actustar Magazine. Tom quickly placed a defamation suit of 10 million dollars toward Bradford, then eventually won the case as Bradford was ordered to pay 17 million dollars by August 2001.

Another fact about Tom that also came up to the surface was his faith in Scientology. Tom had converted to this religion shortly after the release of "Top Gun" in 1986. Being a board member of Hubbard's Hollywood Education & Literary Problem (HELP), he declared that it was Scientology that had helped him to cure his dyslexia. This raised various reactions, including that from The International Dyslexia Association which considered his statement as unscientific. Tom got more and more active promoting Church of Scientology's teachings by 2004 after he replaced his publicist, Pat Kingsley, with his sister, Lee Anne, who is also a scientologist. In June 2005, he ignited controversy as he criticized Brooke Shields for relying on psychiatric drugs to overcome her depression. It was because he fully supported the Scientology's idea which rejected the use of that kind of medication. After all, despite those conflicts happened in his life, people undoubtedly will always recall him as one of the most extraordinary, beautiful, and significant actors the world ever has.

On November 18th, 2006 merely seven months after the arrival of baby Suri, TomKat exchanged vows in a black-tie lavish wedding ceremony at the Odescalchi Castle in Lake Bracciano, Italy in front of more than 150 guests. Cost at nearly $2.5 million, the wedding was becoming a hot commodity in Hollywood, dominating the gossip pages everyday even after the celebration was over. It was the location, huge preparations, posh cuisine, wedding souvenir, and A-list celebrity guests that made the wedding extraordinary. No doubt it was later on credited as "wedding of the year." Afterwards put his focus back on his acting career, Tom wonderfully did not waste time to pile up more film credits into his resume by signing on for "Lions for Lambs" (2007), "Valkyrie" (2009), and "The Hardy Men" (2009), in the meantime also seating as producer in the former two via United Artists, the film company he has been in charge of since late 2006 following his split from Paramount Pictures after fourteen years of collaboration in producing big screen titles.

All videos of Tom Cruise 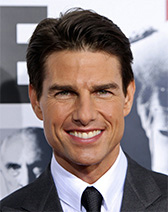