Who is Josh Peck?

Actor Josh Peck rose to fame as a teen star, initially thanks to a frequent presence on the Nickelodeon children's television network.
He began with a multi-season stint on the youth-oriented sketch comedy variety series The Amanda Show (as one of the ensemble players supporting lead Amanda Bynes), and then received title billing on his own series, Drake & Josh, which ran from 2004 to 2007. In that program, Peck played one of two constantly quarreling teens who inadvertently wind up as stepbrothers when their single parents wed -- then engage in a series of colorful adventures together and forge the closest of friendships. Commensurate with the long-running success and popularity of this program, Peck was able to branch out into movies with minimal effort -- in such films as (the Nickelodeon-produced) Max Keeble's Big Move, Ice Age: The Meltdown (where he provided the voice of Eddie), and a supporting role as Ronnie in the Owen Wilson comedy Drillbit Taylor (2008). The initially chubby Peck also made headlines for losing a prodigious amount of weight in a concerted effort to get fit and healthy. He later reflected on his body image: 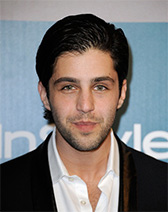