Who is Adam Sandler?

The comedian and screen actor Adam Sandler was born into a Jewish working-class family in the New York borough of Brooklyn.
His father, Stan, was an electrical engineer by trade, while his mother, Judy, was a full-time homemaker. Sandler was the third of four children, and has one brother and two sisters, called Scott, Elizabeth and Valerie.

Shortly after birth, Sandler was diagnosed with a troublesome speech impediment which makes his jaw move in a diagonal direction when he speaks. Sandler had extensive speech therapy for this problem whilst he was growing up, but it has never totally been cured and can still be observed if Sandler gets upset or overly stressed.

When Sandler was six years old, his family moved away from New York to the city of Manchester in New Hampshire. He went to school at Webster Elementary and Hillside Junior High, but did not shine at his studies, preferring wrestling and basketball to more academic pursuits. Sandler remains a keen basketball player to this day and likes to shoot hoops wherever he happens to be performing.

He went on to study at Manchester Central High School and then enrolled for a degree course in Drama and Fine Arts at New York University. He also worked as a resident assistant to help pay his way through higher education.

Sandler began his acting career in the 1980s, playing Theo Huxtable’s good friend Ed on 'The Cosby Show' from 1985 to 89. He also took part in the MTV Game Show, 'Remote Control', where he soon became renowned for playing the parts of Trivia Delinquent and Stud Boy. Sandler then decided to broaden his acting experience by working as a stand-up comedian at a club in Boston and, as a result of this, he received his first really big break. After his stint in Boston, he went on to perform at the Improv Club in LA, where the comedian Dennis Miller happened to catch his set. Miller immediately recommended Sandler to Lorne Michaels, the producer of 'Saturday Night Live'.

In 1990, he was engaged as a comedy scriptwriter for the show, but the producers soon realised that there was no-one as well equipped to deliver Sandler’s zany material as the man himself! He quickly moved on to performing in SNL the following year, creating a string of wacky characters as well as impersonating such showbiz greats as Axl Rose, Bruce Springsteen, Tina Turner and Bono. Taking part in 'Saturday Night Live' helped Sandler to build the foundations of his career as a comedy actor, and he left the show in 1995 to focus on movie acting.

Sandler’s first major leading role was in 1989, when he starred in the movie ’Going Overboard’. However, it wasn’t until 1995 that he made his breakthrough movie, when he starred in a film called ‘Billy Madison’. Here, Sandler plays a man who is forced to repeat his primary education in order to satisfy the provisions for inheriting his father’s multi-million dollar hotel business, along with his father’s respect! Sandler followed his success in Billy Madison with a string of other box-office hits, including ‘Happy Gilmore’ (1996), and ‘The Wedding Singer’ (1998), which took $80 million in a short space of time, and was his biggest grossing movie to date. Sandler was also originally cast to star in the black comedy bachelor party movie ‘Very Bad Things’, alongside Cameron Diaz, but was forced to drop out due to a clash of schedules on other movies.

Sandler has continually demonstrated his ability to keep many irons in the fire by maintaining a high-profile presence on a range of popular light entertainment TV shows, at the same time as pursuing his movie acting career. He had a cameo role in an episode of ‘The Price Is Right’ during the Happy Gilmore Showcase. (Incidentally, the show host Bob Barker also appeared in the movie Happy Gilmore, which featured a famous fight scene with Sandler’s character, which Barker happens to win!)

Sandler also maintains a high profile small-screen presence by being a frequent guest on popular TV talk shows; for instance, he was a special audience member in an episode of ‘The Showbiz Show’ with David Spade, and he was also the feature guest on the final episode of John McEnroe’s CNBC talk show. Sandler has also demonstrated his ability to reverse roles and even act as a talk-show host on occasion. On 20 March 2007, he was due to appear as a guest on ‘The Late Show with David Letterman’, but Letterman fell ill, and Sandler stepped in as host instead!

Many of Sandler’s early films were poorly received by the critics, but recently he has received far more positive reviews, perhaps on account of his ever-growing ability to generate substantial box-office revenues. It has also become popular to cite the idea that Sandler possesses far greater acting talent than the critics originally believed, and to blame this oversight on the fact that he was given poor scripts and shallow characters to play.

Sandler has consistently capitalised on his genius for slapstick humour and goofball comedy. However, in recent years, he has also broadened the scope of his repertoire, embracing more serious roles as well, such as his starring role in Punch-Drunk Love, for which he received a Golden Globe nomination. He was also highly praised for his performance in ‘Spanglish’.

Sandler attracted a flurry of negative publicity when some critics commented on recurring similarities in several of his movie roles. This observation was further highlighted when Sandler was lampooned in the episode of South Park called ‘AWESOM-O’, where he was sardonically depicted as a repetitive film-maker. The character Cartman, while pretending to be a robot working for Hollywood studios, sends out hundreds of film ideas all portraying Adam Sandler in similar roles, as a desperate ploy to make a movie that would generate huge box-office returns.

Although Sandler is certainly far from being typecast, it’s true that many of the characters that he plays in movies do tend to have a bad temper, which they’re frequently provoked into losing - as in ‘Anger Management’. He has also starred in several movies in which a large amount of money is at stake, and Sandler is called upon to save the day - as in ‘Happy Gilmore’, ‘Mr Deeds’, and ‘Billy Madison’. But while there are certain similarities to be found in many of the roles he plays, Sandler has frequently demonstrated his ability to move between different types of media (TV, movie acting and stand-up comedy), as well as his ability to play both humorous and serious roles, and even romantic heroes, as in ‘50 First Dates’ with Drew Barrymore as his leading lady.

Sandler is well known in Hollywood for his preference for acting with his buddies. He has often teamed up with his best friend Rob Schneider, and the two actors frequently play cameo roles in each other’s movies. Notably, Schneider has played cameo roles in most of the films Sandler has starred in, including ‘The Longest Yard’, ‘Little Nicky’, ‘Big Daddy’, ‘Mr Deeds’, ‘50 First Dates’, ‘The Waterboy’, ‘Eight Crazy Nights’ and ‘Click’. Conversely, Sandler has played cameo roles in most of Schneider’s leading-role movies, such as ‘The Hot Chick’, ‘The Animal’, ‘Deuce Bigalow’, and ‘European Gigolo’, where Sandler plays a cameo role as one of the dead gigolos! Sandler is also great friends with the well known US comedian Norm MacDonald, and played a cameo role in MacDonald’s movie, ‘Dirty Work’.

Despite his wacky, goofball humour, Sandler is very much a leading Hollywood star. He was a serious contender for the part of Willy Wonka in ‘Charlie and The Chocolate Factory’ before the producers decided to give the role to Johnny Depp. Sandler also starred in the movie ‘Click’ in 2006, which delivers a serious message about the stresses and strains of everyday life, as well as featuring the more familiar elements of Sandler’s comedy acting style.

Sandler also starred in a highly challenging serious role in Mike Binder’s movie, ‘Reign Over Me’, where he plays a man who loses his entire family in the tragedy of 9/11, and rediscovers a long-lost friendship with his old college room-mate, who is played by Don Cheadle.

Teaming up with Kevin James, Jessica Biel, Dan Aykroyd and Steve Buscemi, Sandler went back to what many fans know him for by starring in 2007 comedy ‘I Pronounce You Chuck and Larry’. He played the character of a fireman who is forced to pretend to be gay and married in order to qualify for domestic partnership benefits. The film, which he was executive producer for, was hugely successful despite negative reviews and grossed more than $255 million at the box office.

He also produced his next movie, the 2008 comedy ‘You Don't Mess with the Zohan’, which saw him star as an Israeli counter terrorist army commando who fakes his own death and heads to New York to pursue a career as a hairstylist. Just like his previous effort, critics were not overly impressed, but this did not prevent the film from being a commercial success. A Kids' Choice Award nomination for Favorite Movie Actor came Sandler’s way in the same year for his fantasy comedy Bedtime Stories.

In 2009, he went on to star in director Judd Apatow's comedy ‘Funny People’ alongside Seth Rogen and Leslie Mann and followed this with ‘Grown Ups’. The latter saw him team up once more with Kevin James, as well as Chris Rock, David Spade and Rob Schneider, and was a commercial success. Sandler has since appeared in ‘Just Go With It’, ‘Zookeeper’ and ‘Jack and Jill’, 'That's My Boy' and 'Grown Ups 2'.

Sandler’s private life appears to be happy and contented. In 2003, he married his girlfriend of four years’ standing, actress and model Jacqueline Titone. She gave birth to a baby girl called Sadie in May 2006. But Sandler’s relationship with the print media is far from harmonious. Indeed, Sandler became so tired of being misquoted in the press that he now totally refuses to give interviews to newspapers and magazines, and even only occasionally agrees to give interviews on TV. This reluctance to talk to the print media has earned Sandler the nickname 'The Goofball Garbo' - but since he’s now appeared in no less than seven films that have grossed in excess of $100 million, he certainly doesn’t need the publicity.

Regardless of the occasional accusations of typecasting, one thing is certain: thanks to Sandler’s ability to amuse and entertain us while delivering substantial box-office revenues, we’ll be seeing him in starring Hollywood roles for a considerable time to come.

All videos of Adam Sandler 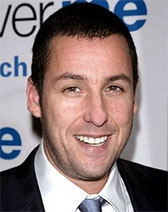