Adele (born Adele Laurie Blue Adkins 05.05.1988) is a British singer-songwriter who rose to fame after being selected in the BBC's annual end of year 'Sound Of' poll in 2008.
Adele was born in Enfield, North London and started singing at the age of four, impersonating the Spice Girls at dinner parties. Her mother even made her a sequin eye patch because she wanted to look more like Gabrielle.

As she was growing up, Adele became interested in a wide variety of music, singing Destiny's Child songs at her school, then going through a heavy metal phase, wearing Slipknot t-shirts and studded dog collars. She later became interested in the likes of Ella Fitzgerald and Etta James.

Adele attended the highly publicised BRIT School in Croydon, which was also attended by Amy Winehouse, Leona Lewis, and Kate Nash. Adele graduated from the school in 2006 and soon published a couple of her songs on the online publication PlatformsMagazine.com.

Adele went on to tour with a number of people, including her friend Jack Penate, Jamie T and Devendra Banhart. Her first headline tour came in 2007.

Debut Album Onwards: Adele's first track, 'Hometown Glory' was written when she was just 16 years old. She later signed to XL Recordings, home to The Prodigy, MIA and Radiohead. Adele came to the attention of XL Recordings after posting a track on a MySpace page. When she received her first call from a record company, she assumed that it was a hoax.

'Hometown Glory' was released as Adele's debut single and in December 2007, Adele won the Critics' Choice Award at the Brit Awards. In January 2008, it was followed by 'Chasing Pavements'. 'Chasing Pavements' was co-written by Ivor Novello-winning Eg White, who orchestrated the piece.

Adele's debut album was named 19. In February 2008, the album entered the UK album chart at the top spot. Later that year, Adele's record deal was expanded into a joint contract with Columbia Records and XL Recordings. In February 2009, the album was certified Gold in the USA, as well as being nominated for the 2008 Mercury Music Prize Award. Paul Rees, the editor of Q magazine, also heaped praise on Adele, noting that after a slew of male bands like The Libertines, Adele's music was a welcome change. On top of this, Beyonce Knowles and Kanye West have also been vocal in their praise of her talents.

Adele's US TV debut came when she appeared on The Today Show. She also made a number of other notable appearances, including the Late Show With David Letterman The Ellen Degeneres Show and Late Night With Conan O'Brien.

Adele also made a TV appearance on the hugely popular US show Ugly Betty, appearing as herself, playing at a wedding. The song 'Hometown Glory' has been widely used in a number of television shows, such as So You Think You Can Dance, Skins and Grey's Anatomy.

Early in 2009, a number of live dates were posted on Adele's website, including a June date at the Hollywood Bowl with Etta James, one of her idols.

In April 2009, appeared in Vogue Magazine, in a photo shoot by Annie Liebovitz.

A deluxe edition of 19 was released which featured a collaboration with Jack White on a cover of The Raconteurs' 'Many Shades Of Black'. At the BBC Electric Proms in 2008, Adele performed with Burt Bacharach, singing 'Baby It's You'. She also sings on Daniel Merriweather's debut album, on a track entitled 'Water and a Flame'.

After the success of her first album Adele released her second studio album 21 on 24 January 2011 she claimed that the inspiration behind this album came from the breakup of her second partner. The album made it to number 1 in 26 different countries across the world.

Her appearance on the Brit Awards in 2011 with the single 'Someone Like You' saw her gain the number one hot spot in the UK. Her first album re-entered the album chart alongside 21 and so did her first single 'Rolling The Deep'. This meant that she became the first living artist to have released both in the Official Singles Chart and the Official Albums Chart at the same time since The Beatles in 1964.

In December 2011, 21 became the fastest selling album of the 21st century selling over 3.4 million copies in the UK. To promote the album she went on the Adele Live tour but this had to be cancelled due to a vocal- cord hemorrhage, this meant she had to have laser surgery and extended period of rest in order to recover.

In 2012 she made her live comeback at the 2012 Grammy Awards where she won in all of the six categories that she was nominated for, this made her the second female artist to win in all her categories on a single night. She also received to further awards in the same year from the Brits for Best British Female and British Album of the year.

In 2012 she confirmed that she had been composing the song Skyfall for the twenty-third James Bond film. This song sold 176,000 copies in the UK and 261,000 in the US it also earned her the Golden Globe Award for Best Original Song and the academy award for Best original song.

In 2013 she received her ninth Grammy for Best Pop solo Performance for her live performance of 'set fire to the rain'. She also spoke of taking a few years off in order to live her life and then her third album would be released.

Her fourth studio album titled 25 was released on 23rd October 2015 where she stated that this album was a 'make up record' that is making up for lost time and getting to know who she has become without even realising. She has said that this will be the last album titled her age and is an end to the trilogy.

On the 30th October 2015 the single Hello was released ahead of the album and in it became number one in the UK singles chart and sold 330,000 copies on its release.

The album made its debut on the UK Albums Chart selling 800,000 copies and became the fastest selling album in the charts history. She has sold 19 million copies globally and spent seven weeks at the top of the UK Albums chart.

In November 2015 Adele announced her first tour since 2011, the tour sees her visiting Europe, the UK and the USA.

At the 2016 Brit Awards she won four Brits including British Album of the year and closed the ceremony performing 'When We Were Young' with an emotional performance showing how grateful she was for the support that she has received after taking a few years out.

Adele headlined Glastonbury on the Pyramid Stage in 2016.

In January 2012 it was reported that Adele had been dating Simon Konecki a charity entrepreneur since 2011, it was announced in June 2012 that the couple were expecting their first baby. Their son was born on 19th October 2012 and is called Angelo. Since the birth of her son she states that since becoming a parent she now feels as if she has a purpose to her life.

Adele has been criticised in the media for being overweight but states that she would much rather go out for a meal with friends than to the gym.

Adele also likes to be involved in various charity events as she has performed at numerous charity concerts throughout her career and has raised thousands for Sands the UK stillbirth and neo-natal death charity. 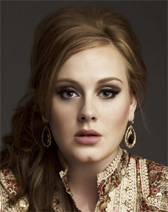