Who is Amy Winehouse?

Amy Winehouse was a five-time Grammy Award-winning English singer-songwriter known for such hits as 'Rehab' and 'You Know I'm No Good' among her other works.
She was born Amy Jade Winehouse, on September 14, 1983, in Enfield, London, England to a Jewish family with Russian ancestry on her mother's side. Her father, Mitchell Winehouse, was a taxi driver; her mother, Janis Winehouse (nee Seaton), was a pharmacist. Her family shared her love of theater and music. Amy was brought up on jazz music; She received her first guitar at age 13 and taught herself how to play. Young Amy Winehouse was a rebellious girl. At age 14, she was expelled from Sylvia Young Theatre School in Marylebone, London. At that time she pierced her nose and tattooed her body. She briefly attended the BRIT School in Croydon, and began her professional career at 16, performing occasional club gigs and recording low cost demos. At age 19, she recorded her debut, Frank (2003), a jazz-tinged album that became a hit and earned her several award nominations. During the next several years, she survived a period of personal upheaval, a painful relationship, and struggles with substance abuse. Her 2006's album 'Back on Black' was an international hit, and 'Rehab' made No. 9 on the US pop charts.

Her big break came in 2008. Amy Winehouse became the first British female to win five Grammy Awards on the same night, February 10th, 2008, including Best New Artist and Record of the Year for 'Rehab'. Her Grammy performance was broadcast from London via satellite, because she was unable to appear in person in Los Angeles due to temporary problems with her traveling visa. Following her success at the Grammy Awards, Winehouse gave a string of highly successful performances during the year 2008. In June, she was suddenly hospitalized with a serious lung condition. However, she left hospital for one evening to perform for Nelson Mandela on his 90th birthday celebration in London's Hyde Park. She sang her hits Rehab and Valerie, drawing cheers and applause form the crowds and a smile from Mandela. Winehouse also performed for Roman Abramovich's party in Moscow; there she earned $2 million for her one-hour gig.

Amy Winehouse developed a distinctive style of her own. Her signature beehive hairstyle has become the model for fashion designers, while her vulnerability, her fragile personality and self-destructive behavior was regular tabloid news, and subject of criticism and controversy. In April 2008 she was named the second greatest "ultimate heroine" by the British population at large, and a month later was voted the second most hated personality in the UK. George Michael called her the "best female vocalist he has heard in his entire career," while Keith Richards warned that she "won't be around long" if her behavior doesn't change.

Musically, Amy Winehouse created a cross-cultural and cross-genre style. She experimented with an eclectic mix of jazz, soul, pop, reggae, world beat and R&B. She had a special ability to channel hurt and despair into her performances. Her voice, phrasing and delivery sometimes sounded like a mix between Billy Holliday, Dinah Washington and Sarah Vaughan, and coupled with similarities in personal problems, she at times resembled another incarnation of legendary "Lady Blues".

Amy Winehouse died at the age of 27, on 23 July 2011, in her London home following a long-running battle with alcohol addiction. She was cremated at Golders Green Crematorium and her ashes were laid to rest in Edgwarebury Jewish Cemetery in London, United Kingdom. Her death caused considerable mourning worldwide. 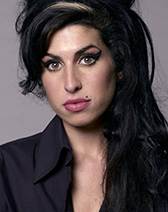