Who is Chester Alan Arthur?

Chester Arthur was the fifth child of a fervent abolitionist preacher who moved his family from one Baptist parish to the next throughout New York and Vermont. Attending Union College, Arthur showed far more interest in extracurricular activities and political demonstrations than in his studies. As a young man, Arthur worked for one of the most prominent law firms in New York City. He was involved in two cases focusing on African American rights. One involved fugitive slaves while the other centered on segregated streetcars.

Arthur also worked actively for Roscoe Conkling, a New York Republican Party boss and U.S. senator who used patronage and party discipline to advance his power. Conkling headed a major party faction, the Stalwarts. Recognizing the administrative genius that Arthur demonstrated as quartermaster general for all of New York during the Civil War and his success as a lawyer, Conkling helped Arthur get appointed as collector of the Port of New York under Republican President Ulysses S. Grant. While there is no evidence of blatant corruption on Arthur's part, the New York Customs House had close ties to Boss Conkling's political machine; Arthur routinely collected kickbacks of salary called "assessments" from customs house employees to support the Republican Party.

In 1881, Arthur became vice president under the moderate Republican candidate, James Garfield. Under President Rutherford B. Hayes's administration, there had been attempts to reform New York's corrupt civil service system, and Arthur broke with President Garfield when Garfield appointed a member of the rival Republican faction, the Half-Breeds, to the post of collector of the Port of New York. The move destroyed Conkling's power once and for all. Arthur and Garfield were nearly estranged when Garfield was assassinated and Arthur found himself President.

As President, Arthur surprised everyone by acting independently, defying his state-based reputation as a slick machine politician who would advance the agenda of his own party faction and ignore the needs of the nation at-large. Domestic affairs dominated his presidency. In reforming civil service, Arthur supported the Pendleton Act, which attempted to counter patronage and cronyism by requiring competitive exams for government office. Specifically, the law banned salary kickbacks and ensured that promotion would be based on merit, not connections. While the Republican Party usually worked to protect big business and manufacturing, Arthur pushed for tariff reduction to relieve indebted farmers and middle-class consumers. He also vetoed the notorious pork-barrel Rivers and Harbors Act of 1882, arguing that the growing surplus of federal funds should be decreased by tax reductions rather than government expenditures. After vetoing a more restrictive bill, Arthur supported the Chinese Exclusion Act of 1882, banning Chinese immigration for ten years and forbidding Chinese citizenship.

Arthur was most passionate about his project to refurbish the White House. Known as a man of elegant taste who loved to throw lavish parties, Arthur came to the presidency as "The Gentleman Boss." Disgusted with the shabby look of the executive mansion, Arthur hired the most famous designer in New York, Louis Comfort Tiffany, to transform it into a showplace befitting the office. His wife, Ellen Lewis Herndon, had died before he assumed office. And although Arthur loved to showcase his two children at White House social affairs, he much preferred fishing, feasting with his cronies, and administrative work to family life. Because he knew that he suffered from a fatal kidney disease, Arthur did not actively seek reelection for a second term and died less than two years after leaving office.

Chester A. Arthur's administration marks a period of transition in American politics. Women were beginning to take an active role, pressing strongly for women's suffrage and prohibition of alchoholic beverages. Above all, the era was characterized by civil service reform, which would eventually weaken the grip of traditional ethnic and party loyalties. Despite having advanced in his career through managing the New York political machine, Arthur showed tremendous flexibility and a willingness to embrace reform. He stands as an important transitional figure in the reunification of the nation after the bitter turmoil of the Civil War and Reconstruction.

All videos of Chester Alan Arthur 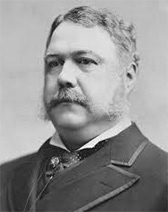