Who is Hugh Grant?

A graduate of Oxford, actor Hugh Grant would seem more a natural product of Cambridge University, breeding ground for such comic talents as Monty Python's Flying Circus. Grant's classic good looks make him a shoo-in for romantic leads, but his comic abilities -- marked by a nervous stutter, desperately fluttering eyelids, and an ability to capture a brand of distinctly English embarrassment -- have also marked him as a gifted comic performer.
Born in London on September 9, 1960, Grant made his film debut under the very Oxbridge name of Hughie Grant in the Oxford-financed Privileged (1982). He then worked in repertory before forming his own comedy troupe, the Jockeys of Norfolk. Following some television roles, Grant made his first professional film appearance in 1987 with a blink-and-he's-gone part in White Mischief. The same year he did more substantial work, first as Lord Byron in Rowing With the Wind, and then as a sexually conflicted Edwardian in Ismail Merchant and James Ivory's adaptation of E.M. Forster's Maurice. The role won him a Best Actor award at the Venice Film Festival, but despite such acclaim, Grant's next films were largely forgettable affairs. One exception -- albeit a dubious one -- was Ken Russell's The Lair of the White Worm, in which the actor attained some degree of cult status as a lord attempting to foil the murderous charms of a campy, trampy vampire (Amanda Donahoe).

Following period work in Impromptu (in which he played a consumptive, bewigged Chopin) and another Merchant-Ivory outing, The Remains of the Day, Grant finally hit it big in 1994 with starring roles in two films, Sirens and Four Weddings and a Funeral. The latter film in particular gave the actor almost overnight transatlantic stardom, landing him on a number of magazine covers and TV talk shows. The following year, Grant gained fame of an entirely different sort when he was arrested for soliciting the services of an L.A. prostitute. The box-office take of his subsequent film, Nine Months, released on the heels of his arrest, was buoyed by his notoriety, as were the ratings of the episode of The Tonight Show which featured Grant's sheepish apology to his then-girlfriend, model/actress Elizabeth Hurley.

The actor managed to recoup some of his professional dignity with a restrained performance as Emma Thompson's suitor in the acclaimed Sense and Sensibility, but his next feature, Extreme Measures, a thriller produced by his and Hurley's production company, Simian Films, proved a disappointment. Following this relative failure, Grant receded somewhat from the public consciousness, but reappeared in 1999 with Notting Hill. A commercial as well as relative critical success, the comedy helped to restore some of the actor's luster, further assisted by his roles in the comedies Mickey Blue Eyes (1999) and Woody Allen's Small Time Crooks (2000). After once again charming filmgoers while competing for the affections of Rene Zellwegger in Bridget Jones's Diary, Grant took on the role of a playful London lothario who forms a bond with one of his conquests' offspring in the romantic comedy About a Boy. Indeed, the romantic comedy seemed to be simply the most natural fit for the actor, and he found more success in new millennium with returns to this genre in Two Weeks Notice, Love Actually, and the sequel to Bridget Jones's Diary, Bridget Jones: The Edge of Reason.

He played a fictionalized version of Simon Cowell in the comedy American Dreamz, and was solid as a washed-up 80's pop star opposite Drew Barrymore in the romantic comedy Music and Lyrics in 2007.

He made headlines when he figured into the phone hacking scandal in the UK, becoming one of the most high-profile celebrities to explain how the British tabloids have been operating for years. 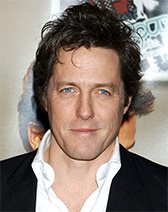