Who is Jean Claude Van Damme?

Jean-Claude Camille François Van Varenberg was born in Berchem-Sainte Agathe, which is a suburb in the east of Brussels, the capital city of Belgium. He is the second child in his family, with an older sister.
Being a skinny, glasses-wearer, his father thought it would be a good idea to toughen Jean-Claude up and took him to his first martial arts lesson. He progressed with his training for many years, adding ballet and bodybuilding as he began to mold himself into the all round action figure that we know today.

Van Damme opened a gym which he ran a while and also undertook some modelling work, but the burning desire to be a movie star took over and he did his best to break into the martial-arts film industry in Hong Kong. This proved difficult and Jean-Claude moved to Los Angeles to get the break into film he passionately sought.

Again, this break into films did not prove easy, but Van Damme persisted, taking jobs as a waiter, cab driver, aerobics instructor and nightclub bouncer to earn money while taking on whatever small acting roles he could. He got his bouncer job thanks to Chuck Norris, who also managed to get the then unknown actor a role as a hitchhiker in his movie “Missing In Action”.

Finally, Jean-Claude got two much needed big breaks. The first was a role in “No Retreat, No Surrender” and the second was a meeting with film producer Menahem Golan. Van Damme demonstrated a few of his more acrobatic moves and landed the lead role in “Bloodsport“.

Jean- Claude began his film career trying to break into films in Hong Kong. With limited success there he moved to Los Angeles and started to build a network of contacts.

“Bloodsport” proved to be his big break, as it took in over $35 million dollars at the box office. This thrust Van-Damme into the limelight and started his most successful decade where he would reach the height of his fame. Many successful films followed including “Kickboxer“, “Death Warrant”, “Lionheart” (renamed “A.W.O.L” for European audiences) “Double Impact”, “Universal Soldier”, “Sudden Death” and “Maximum Risk”.

After starring in many action films, including the video game spin off film “Street Fighter” with Kylie Minogue, and “Timecop”, which grossed over $100 million dollars worldwide, Van Damme wanted to take the next step and direct his own films. He made the leap in 1996 when he directed his first film entitled “The Quest” (Starring himself and Roger Moore). “The Quest” was commercially a success, doubling the studio’s investment; however it was not as well received critically as some of his previous films.

Van Damme made further films in the late 90’s including such titles as “Double Team”, “Knock Off” and “Universal Soldier: The Return”. This was Jean-Claude’s second Universal Soldier film and was the last of these films theatrically released until 2008 when he returned with “JCVD”, although he did continue to make films during those 9-years.

The movie “JCVD” was well received critically and helped lead to a further Universal Soldier film in 2010. Van Damme’s comeback star rose again and he was cast in “The Expendables 2” , as well as voicing a character (Master Croc) in the hit animated film “Kung Fu Panda 2”. A fourth Universal Solider film and a number of further roles were offered and agreed; “Welcome to the Jungle” and “Pound of Flesh”. In 2016 Van Damme will star in the hotly anticipated star-studded “Kickboxer: Vengeance” film which is eagerly awaited by audiences across the globe. 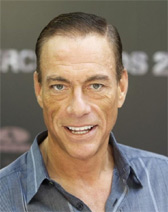