Who is Miley Cyrus?

Christened Destiny Hope Cyrus, Miley Cyrus was born on November 23, 1992 to Billy Ray Cyrus, a country musician and Letitia Jean Tish in Nashville, Tennessee. She shared a close relationship with her paternal grandfather.
She was raised in Franklin, Tennessee, where she attended the Heritage Elementary School. Later in 2001, when she was eight years old her family relocated to Toronto, Canada.

It was while watching her father act in the television series ‘Doc’ that she was inspired to take up acting professionally. To pursue the same, she started attending singing and acting classes at the Armstrong Acting Studio in Toronto.

She enrolled herself at Options for Youth Charter Schools. Additionally, she even appointed a private tutor with whom she studied in between shootings, at the sets of the television show.

Her first stint with acting was for the 2001-released family medical drama series, ‘Doc’. Her father starred in this series and also composed the theme music for the show.

In 2003, she played the role of an eight year old girl, ‘Ruthie’ in the Golden Globe nominated fantasy adventure film, ‘Big Fish’. The film was based on Daniel Wallace's novel of the same name.

In 2006, she began to star in the Disney Channel television show, ‘Hannah Montana’. In the show, she played the role of a teenage girl who is a famous pop singer. The series was a big hit and launched the career of this talented newbie in the entertainment industry.

The second season of Hannah Montana premiered in April 2007 and ran until October 2008. In June 2007, she came out with her debut album, ‘Hannah Montana 2: Meet Miley Cyrus’. The album did not gain much recognition, but sparingly topped the music charts.

In February 2008, she starred in the Walt Disney Pictures 3D concert film of the tour, ‘Hannah Montana & Miley Cyrus: Best of Both Worlds Concert’. Directed by Bruce Hendricks, the film earned over $31 million at the box office.

In July 2008, she came out with her second studio album, ‘Breakout’. The album debuted at number one position on the Billboard 200 in its very first week of release. It not only established her singing career but also gave a fairy-tale start to her songwriting career, as she co-wrote eight of the ten songs in the album.

In 2008, she gave a voiceover for the character ‘Penny’, for the computer animated film, ‘Bolt’. The film was directed by Chris Williams and Byron Howard.

In 2009, she starred in the comedy-drama film, ‘Hannah Montana: The Movie’, based on the TV show, ‘Hannah Montana’. The film was a financial success and so was its soundtrack which contained twelve songs performed by her.

She was seen in the third and fourth season of ‘Hannah Montana’ series. Meanwhile, she released her third studio album, ‘Can’t Be Tamed’ on June 2010. The album debuted at number three on the Billboard 200.

In 2010, she played the role of ‘Veronica "Ronnie" L. Miller’ in the teenage romantic drama film, ‘The Last Song’. The film was based on a novel of the same name.

In 2011, she hosted the Saturday Night Live and appeared on the MTV series Punk’d. The following year, she starred in a couple of movies including, ‘Sex and the City 2’, ‘LOL’, ‘So Undercover’ and the 3D concert film, ‘Justin Bieber: Never Say Never’.

Year 2012 saw her recording a song with Bob Dylan, ‘You’re Gonna Make Me Lonesome When You Go’. The song gained widespread acclaim from music critics. Subsequently, she was seen making a guest appearance in the CBS sitcom ‘Two and a Half Men‘. 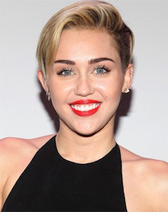