Who is William Shirer?

William Lawrence Shirer was born in Chicago in September 1904. His father Seward practiced law in the Windy City and later served as Assistant United States District Attorney. His mother, Bessie Tanner Shirer, took her son and his younger brother with her to Cedar Rapids, Iowa to live with her parents when their father died of peritonitis in 1913. There, Shirer later enrolled at Coe College, where he worked on the school newspaper staff and wrote for the sports page of the Cedar Rapids Republican.
Briefly enlisting as a teenager in the army and landing summer jobs with the traveling Chautauqua, Shirer left the Iowa prairies upon earning a Bachelor of Arts degree in 1925. He visited Chicago and New York City, then went to Montreal to work his way to Europe pitching hay on a cattle boat. Touring England, Belgium and France, he eventually found a job in the Paris office of the Chicago Tribune just before spending the last of the two-hundred dollars he had borrowed and having to return to the States.

Life in postwar Paris excited the curious young reporter. Besides working with James Thurber and Elliot Paul at the Tribune, he met some of his maverick compatriots who were setting the arts world on its head—among them Hemingway, the Fitzgeralds, Isadora Duncan, Ezra Pound and the imposing Gertrude Stein. Compensating for an isolated past, Shirer began studying European history at the College de France. At the age of twenty-three—more familiar with contemporary Europe and having successfully covered the local beat—he graduated from the Paris edition of the Tribune to the foreign staff of the home edition. This assignment led him to cover Lindbergh’s arrival in Paris and later to be sent to London, Rome, Geneva and Vienna; in 1928 he covered the IX Olympiad Games in Amsterdam. He also went to India to meet Gandhi and to Afghanistan in 1930 to attend Nadir Khan’s crowning.

In 1931 Shirer married Theresa Stiberitz in Vienna. By now the Tribune’s Central European Bureau chief, his bride became his assistant. Shirer lost the sight of one eye in a skiing accident in the Alps in 1932; that disability complicated his work at the Bureau, but it was the spreading effects of the Great Depression that later cost Shirer his job. Living on savings, the couple shared a villa on the coast of Spain for a year with the guitarist Andres Segovia. While there, Shirer wrote an unpublished novel and an early autobiography—which he later destroyed.

The New York Herald hired the anxious Shirer in 1934 to work for its Paris edition. In August of that year, he became a correspondent in Berlin for the Universal News Service, where he served until 1937, when William Randolph Hearst disbanded the service. Then, Edward R. Morrow—chief of the European staff of the Columbia Broadcasting System—placed Shirer in its new office in Vienna. The Anschluss (annexation) of Austria, however, forced him to relocate in Geneva—for, as he later said, he was never one “to argue with bayonets.” At the start of World War II, Shirer once again reported from Berlin—where he remained until his return to the United States in December 1940.

Upon his return to the United States in 1940, William Shirer launched an extensive lecture tour. During the summer of 1941 he served as a technical advisor for the Hollywood production of Passport from Bordeaux and edited his journal into the bestselling book Berlin Diary. From 1942 to 1948 Shirer wrote a column for the New York Herald Tribune syndicate. He also worked as a CBS commentator until 1947, when he resigned over an editorial disagreement with Edward R. Murrow.

As the war ended in Europe Shirer returned to Germany to cover the war crimes trial in Nuernberg and later attended the San Francisco conference that established the United Nations. Winning the George Foster Peabody Award for outstanding interpretation of the news in 1946, Shirer worked for the Mutual Broadcasting System from 1947 to 1949 as a commentator. He continued to lecture and he wrote articles for Life, Collier’s, the Atlantic Monthly and other major magazines. In 1950 Shirer published Traitor, a novel about a man who under extreme pressure betrays his country and works for its enemies.

Shirer went on to write other novels, too, but earned widespread public recognition mostly for his non-fiction writing. He wrote End of a Berlin Diary in 1947 as a sequel to his earlier book. He later wrote additional books based on his childhood in Chicago and Iowa, as well as his travels through Europe and Asia and his meetings with Gandhi and Hitler. It was The Rise and Fall of the Third Reich, however, which won Shirer the 1960 National Book Award and a special Sidney Hillman Foundation award in 1961; his intimate involvement with Hitler’s Germany made him a foremost U.S. authority on the Nazi era and his expertise led to several decades of writing and lecturing. Shirer ultimately divorced his wife Tess, who he had married while living in Europe. 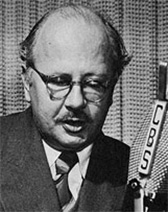