Who is Alexander Skarsgard?

Born in Stockholm, Sweden, Alexander Skarsgård is the eldest of seven siblings. His mother is a doctor and his father is the famous actor Stellan Skarsgard, who helped him land his first acting role at the age of seven, starring in the Swedish film Ake and His World . A few years later, he became known for his role in the Swedish TV series The Dog That Smiled, but the 13-year-old was uncomfortable with being recognized in public and quit acting.
At 19, he enrolled with the Swedish military and stayed for 18 months. In 1996 he attended Leeds Metropolitan University in England to study English, then the following year moved to New York to take a theater course at Marymount Manhattan College. Back in Sweden in 1999, he began working on the TV series Vita longer, playing Marcus Englund.

Skarsgård was first seen in the States playing a character named Meekus alongside Ben Stiller in 2001's Zoolander. He has been in numerous movies in Sweden since then and has also been voted the Sexiest Man in Sweden five times.

In America, his biggest break to date came when he was cast as vampire Eric Northman in HBO's True Blood. He has also starred in Lady Gaga's "Paparazzi" music video. During hiatus from the show, Skarsgård has found time to return to the big screen in movies such as Melancholia (2011) co-starring Kirsten Dunst, Battleship (2012) alongside Liam Neeson and Taylor Kitsch, and The Giver (2014) starring Jeff Bridges and Meryl Streep.

Skarsgård can most recently be seen in the comedy sequel Zoolander 2 (2016), the comedy War on Everyone (2016), and the adventure reboot The Legend of Tarzan (2016). 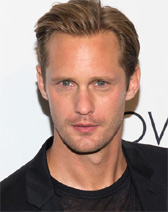